It Ends In a Rug 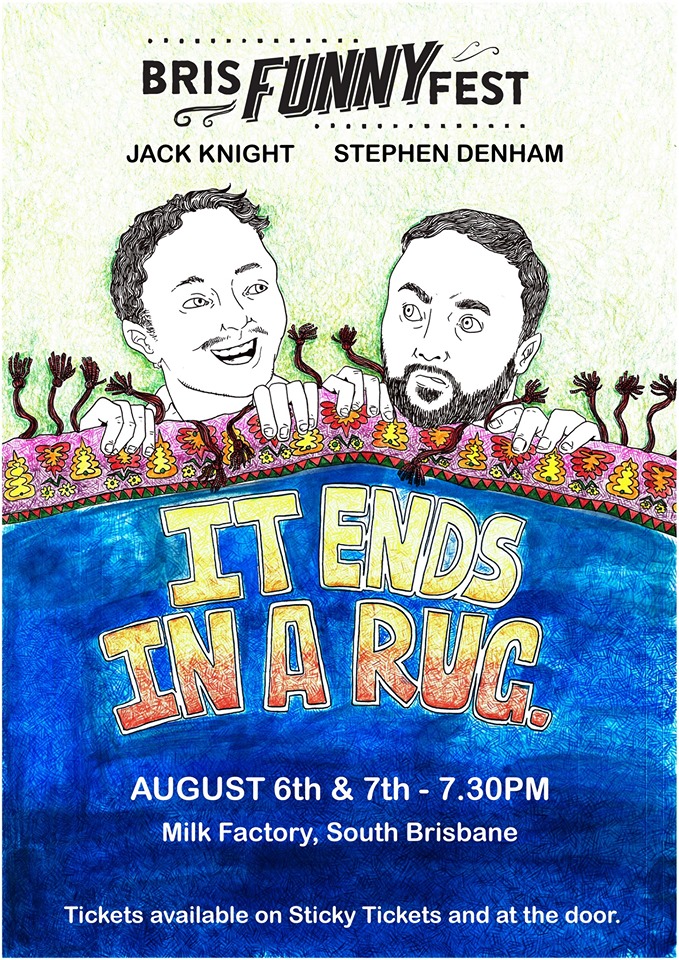 Stephen Denham, one of Toowoomba's premiere purveyors of all things laugh-related, has been busy killing audiences (with laughter, dummy) with his unique take on the banal minutiae of day to day living. His "some holds barred" takes on subjects like dating, popular culture and addiction, among others, have endeared him to audiences up and down the state of Queensland.

Two years ago, a freak lightning bolt hit a crab on the coast of Costa Rica. At the exact same time, Jack Knight appeared on the brisbane comedy circuit, covered in tartare sauce and appearing at established rooms such as Heya, Sit Down Comedy Club and Blutes Bar. Renowned for his colourful shirts and manic personality, he's often confused for an tulip farm in a cyclone, confusing and enjoyable. We reached out to him for a comment but were regrettably informed that he's become lost at a turnip farm, in an attempt to figure out who buys turnips.

Together, they've conspired to create a perfect storm of heartfelt relatability and absurdist nonsense.Their unique odd-couple dynamic and volatile love-hate relationship has has been labelled by audiences, critics and industry insiders alike as "like watching a fun divorce neither of them can see coming" They will be joined by a veritable smorgasboard of special guests that (and they don't know this yet, so don't tell them) have been booked mainly to act as the proverbial "whipping boys" to be on the receiving end of Jack and Stephen's comical abuse so you, the paying public, don't have to be. Yay. A show this special and unique is surely too doomed to last in the cold, harsh climates of today's world so make sure to catch it while you can (i.e. at Bris FunnyFest).