D4WH: Live From The TARDIS! 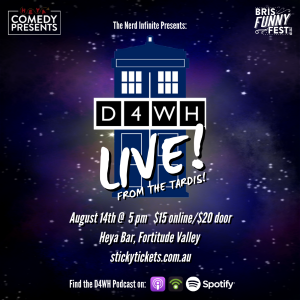 D4WH is a Brisbane based podcast hosted by comedians Adam and Nicchia as they explore Doctor Who. The long running BBC sci-fi series has been on TV since 1963, so there's never any shortage of episodes to review, exciting moments to fan over, and dodgy effects to laugh at. Come and join us for our first ever live show. A special occasion like this needs a special topic, so we'll be pulling out all the stops and covering everyone's favourite baddie - The Daleks!

Since starting in November 2018, D4WH has amassed an exciting fanbase across Australia, the UK, and North America. Every Wednesday the crew, including our trusty BekTech, present another hilarious look at the wondrous world of the Whoniverse. From classic to NuWho, from alien planets to London in the present day, from cackling at silly aliens to sobbing as a favourite leaves, D4WH has all of your Who needs! Whether you're a diehard Whovian, a casual explorer, or you hid behind the couch as a kid and never watched it again, D4WH is sure to tickle your wibbly wobbly funny bone.

Nicchia is a born and bred country girl, a safety officer, a comedian and comedy writer. She's also obsessed with Doctor Who - at the age of 4 she had a bag packed ready for her first trip in the TARDIS. She has performed stand-up in most of the major cities around Australia but still prefers the regional country town gigs. Although Nicchia has been a regular at Bris Funny Fest, performing her third show at the festival, her comedy career highlight to date will always be having the opportunity to support Fiona O’Laughlin.

Adam O'Sullivan has been doing stand up comedy and since 2016 and has performed at open mic rooms in London UK, Edmonton Canada and Ulaanbaatar Mongolia. He also regularly performs improv and was seen in Real Live Fake News (Anywhere Festival 2019), Around The Campfire (Brisbane Comedy Festival 2019), Cool Story Bro (Brisbane Comedy Festival 2018) and Infinite Skies (Anywhere Festival 2018). He was Festival Director of Bris Funny Fest 2018, a role that he continues for 2019 as well. As Adam grows older, he has learnt to become an adult by slowly accepting that his Hogwart’s acceptance letter may never arrive, that his latent mutant powers may never manifest, and that The Doctor may not need him as a companion.

BekTech (aka Rebekah Wolfenden) is often the voice of reason in the D4WH trio. On top of her duties of co-editor/producer and audio technician, she tries to keep everyone focused and steers them out of the intergalactic gutter when the conversation becomes NSFW (Not Safe For Whovians). She also likes to demonstrate her creative skills with Doctor Who themed artworks and memes for the D4WH social media accounts and runs the DAAS YASS fan page and Tumblr.