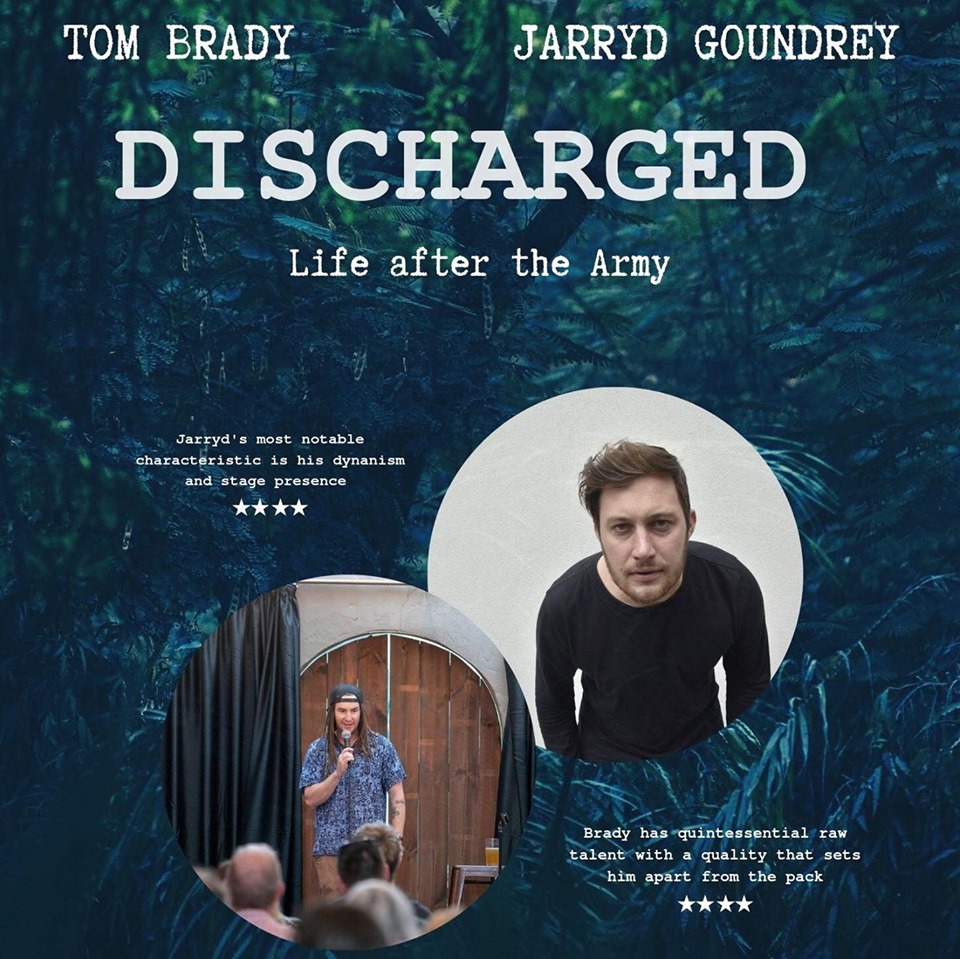 Discharged: “To be dismissed or released from employment. Optionally choosing to terminate place of employment to seek new opportunities.”

Up and coming comedians Jarryd Goundrey and Tomas Brady both escaped the clutches of the Australian Army by successfully and (somewhat) honourably discharging. Since then, both have found solace in telling jokes to forget everything they pretended to know. Leaning from previous experiences from the army and the world gave them, they have the skills to deliver rapid-fire comedy down range and bombard the audience with an enfilade of explosive punchlines. The result of two unique minds with an uncommon perspective usually found in the comedy scene is one of sheer hilarity and poignantly topical themes that leave audiences in fits of inquisitive laughter Goundrey and Brady can make audiences laugh harder and louder than any drill-sergeant has yelled at them. With the innate ability to cry like men off-stage while the audience is crying from laughter onstage, this is a show that is not to be missed!

Jarryd Goundrey is an energetic comedian bursting his way through the comedy scene. At the tender age of 18, he enlisted in the Australian Army, embarking on an adventure of a lifetime. While serving in the military, he welcomed a child into the world, endured a failed marriage and many other strings of failed relationships. All culminating in finding love in making people laugh and followed a natural post-military pathway; choosing to live the life of a comedian. Leaning on his upbringing in sleepy W.A., Goundrey delivers an honest brand of comedy leaving audiences in hysterics from start to finish. Goundrey covers it all; male body issues, gender equality, the dilemma and weirdness of sex and relationships all from the continual love of observing people as a result of military training. You name it; he goes there, all told from the perspective of a man whose life is one big great disaster

Tom Brady is not your average comedian. At only 28 he has already served in Afghanistan, travelled the world as a barefoot, thrill-seeking vagabond and, most importantly, rescued a dog named Chewbacca. Witnessing and experiencing severe famine, war and poverty have resulted in Brady’s off-kilter ability to extract comedy from the darkest scenarios. Finding a cathartic solace in stand-up comedy, Brady has worked effortlessly to develop and perfect the art of his self-branded comedy style “Ranthropology”. The up and coming talent has left audiences in both states of laughter and severe existential torment with his raw and unrelenting passion and emotion. Tom Brady may not be everyone’s cup of tea, but the brutal honesty and sheer determination to make even the bleakest scenarios funny is a must-watch for anyone who embraces openness, reality and humour.