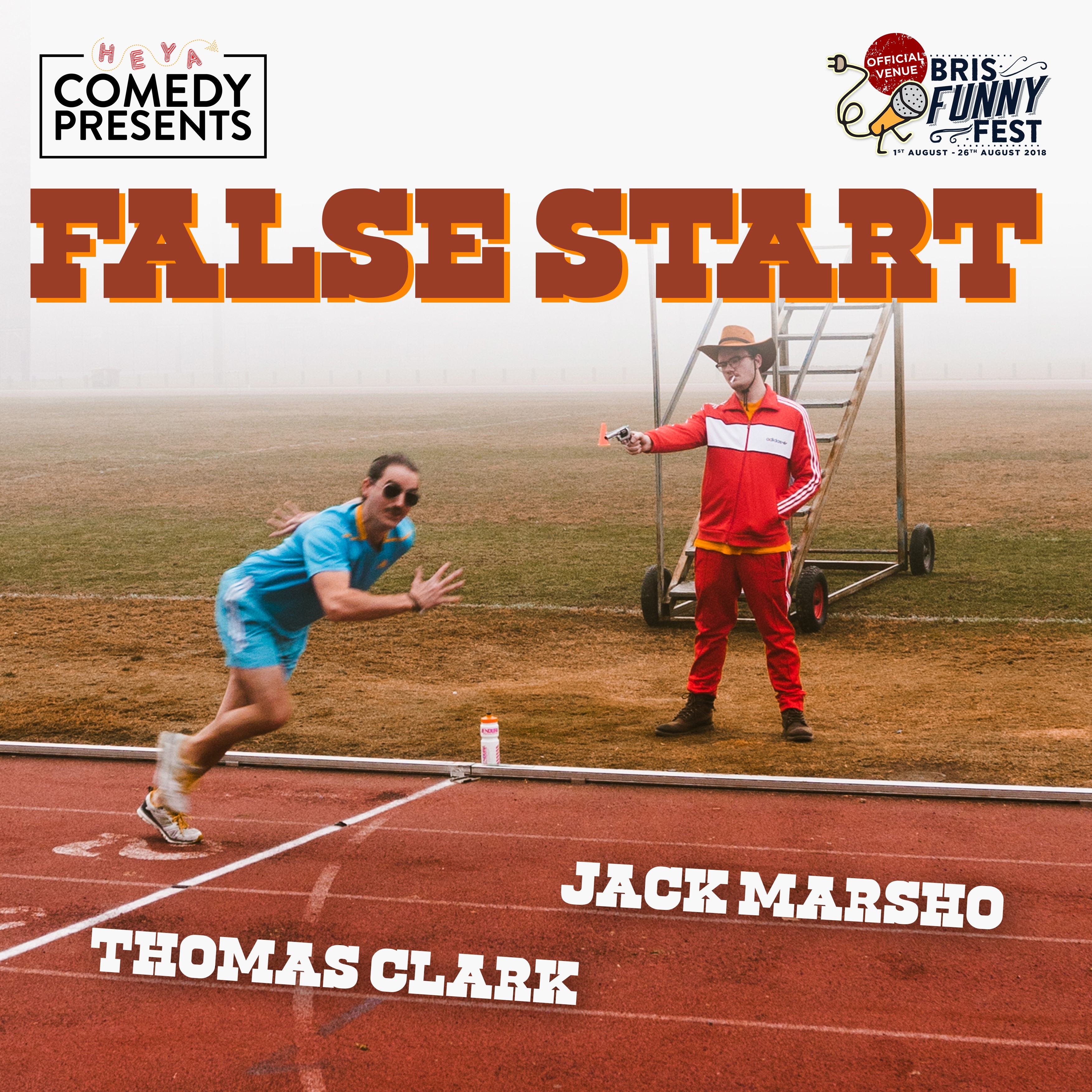 1: a premature start (as of a race)
2: an unsuccessful attempt to begin something (such as a career)

Now we’ve never met Merriam Webster – we called her, but couldn’t get a word in – but if anyone’s familiar with the definition of ‘funny’ it’s gotta be her. When it comes to her opinions on a ‘false start’; however, we think she nailed it the second time.
Outside of the bedroom, there is nothing funny about a false start; but in 2019, all that’s going to change. This phrase, which generally relates to track and field (the least entertaining sector of sport, save swimming) will be usurped and redefined in this hour-long, double-bill, featuring rising comic-stars, Jack Marsho and Tom Clark.
Paradoxically, not only will this comedy showcase begin promptly on time, False Start is hilarious. Proudly unathletic, these two comedians set the bar high (like in high-jump, but with less jumping) with quick-wits being the only the ‘athletic’ attributes they are sporting. Join us this at Heya this August, for an hour of laughter, levity and mirth.

A creative and comedic tour de force, Jack Marsho made his standup debut in 2017 and has since been taking the QLD comedy scene by storm, known for his dry demeanour and willingness to venture into tough topics other comics fail to handle. Marsho is the host of the Beer Shark podcast where he goes to yell alongside Brisbane’s best comics about things his woke friends would be furious about if they were to ever find the RSS. Jack also has a role writing and directing for sketch comedy team Machocast. In False Start he delves into the last year of his life revolving around broken cars, terrible economics and landing face first into a job he didn’t deserve.
Coming off a sell-out, festival debut at the Sit-Down Comedy Fringe, Tom Clark has only been seriously performing comedy for a year or so. In 2016 he made his debut in Triple J’s Raw Competition, and – although he didn’t make it out of the heats – surprisingly, didn’t do that bad. It was this initial exposure that led him to arrogantly avoid the open-mic circuit and enter Raw for a second time in 2017, where he bombed fantastically. Since then, Tom has performed both locally and interstate, and has improved drastically. Bris Funny Fest will mark the longest Tom has spoken into a microphone since his grandfather’s funeral.