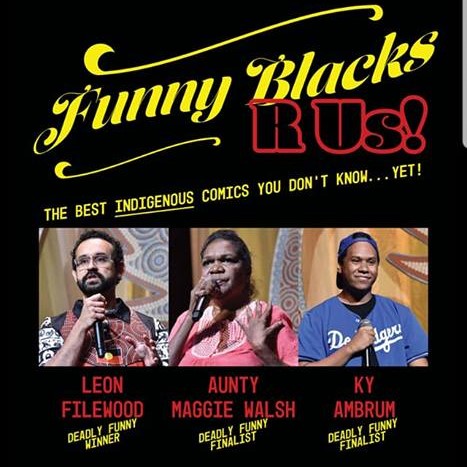 The show is a take on Stand Up Comedy from Aboriginal and Torres Striat Islander perspectives (you know how we go. But if you don't, come and see what I mean).

Aunty Maggie Walsh is a Bwgcolman woman from Palm Island. She is a deep thinker and share her observations as an Old Aboriginal Aunty from her take on the tooth fairy to infomercials.

Kylan Amburum is a Biri Biri and Yidinji man from Far North Queensland. He shares his story and insights from a young Aboriginal man and his idea on what an Aboriginal Prime Minister might look like, slavery and blackface.

Leon Filewood is a Koko Mini, Kuku Yalanji, Ugar Umle and Italgal/Moalgal Aboriginal and Torres Strait Islander from Far North Queensland. He shares the struggles he has encountered being proud 'Black fella' in Australia today!