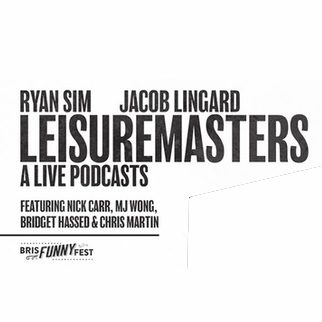 Tackling big issues like suicide pacts, whether cats are better than dogs, the fact Fleetwood Mac just made up most of their songs on the spot, and more, Leisuremasters is a no-holds-barred, 10 minute podcast for jokes. Just jokes. Hosted by Ryan Sim and Jacob Lingard, every two days they release a ten minute onslaught of hilarity for an ever growing audience. And now they're doing it live at Saccharomyces Beer Cafe. What could go wrong? Joined by some great local comedians, including MJ Wong, Bridget Hassed, Nick Carr and Chris Martin, come and see Leisuremasters record 5 live episodes, no matter what happens.