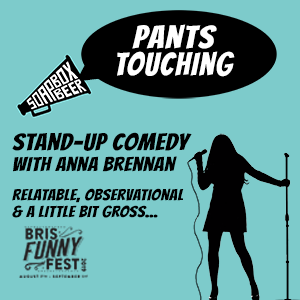 Anna has kissed a lot of commitment phobic toads to get where she is. Who was Chicken Boy? What happened when she shagged her cleaner? And what about that guy from RSVP she spewed molten crazy all over and wanted to touch in the pants? Let Anna regale you with dating tales messed up enough to rival the original fairy tales (seriously, those things were scary; Sleeping Beauty was essentially a me too story).

Anna performed a version of this show at last year's Bris Funny Fest (under the title Douche Canoe) and Bris Funny Fest organiser Adam O’Sullivan described it as "an insightful, hilarious and yes, sometimes a bit dirty, look into the world of modern female dating." Kate Rudge, the unofficial Queen of the Brissy comedy scene, said the show is "Unapologetic and honest, Anna is clearly having a load of fun and it's infectious."

Anna was a QLD Raw Comedy runner up in 2018, and now runs five regular comedy and storytelling nights on the Sunshine Coast.