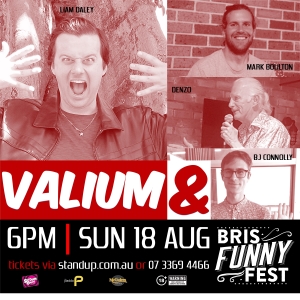 Featuring Liam Daley; One of Brisbane's funniest up and coming comedians brings his own special blend of pointing out the obvious to the audience and looking at things a little differently, to thunderous laughter each time. Liam's unique clean but edgy observational style humour has been seen throughout Queensland, Northern NSW and L.A, California

Joining the support line up is BJ Connolly; a comedian with no boundaries. Listen to BJ Connolly poke fun at his autism and critique the way millennials behave on social media. BJ is self described as "a performance that is destined to go off with blast and will make the audience members wish that they were autistic too!”

Also on the line up is Denzo (Dennis Moore); a comic who has never acted his age, which is good because he would have had dinner and been in bed by now. He's crazy, he's wacky, he's fun and he is as he would say "spanking the age barrier". Denzo has appeared throughout South East Queensland & Northern New South Wales.

Finally, we have Mark Boulton - a vegan who doesn't mind a good roast, and a thrash metal rocker from Byron Bay... clearly breaking stereotypes. Mark also breaks down stereotypes as well as breaking down humanity to find the humour inside everything (and everyone). Mark has been rocking both music & comedy stages throughout South East Queensland & New South Wales.

After the first show's success during the Sit Down Comedy Fringe, get ready for another mix of Valium & at this year's Funny Fest!